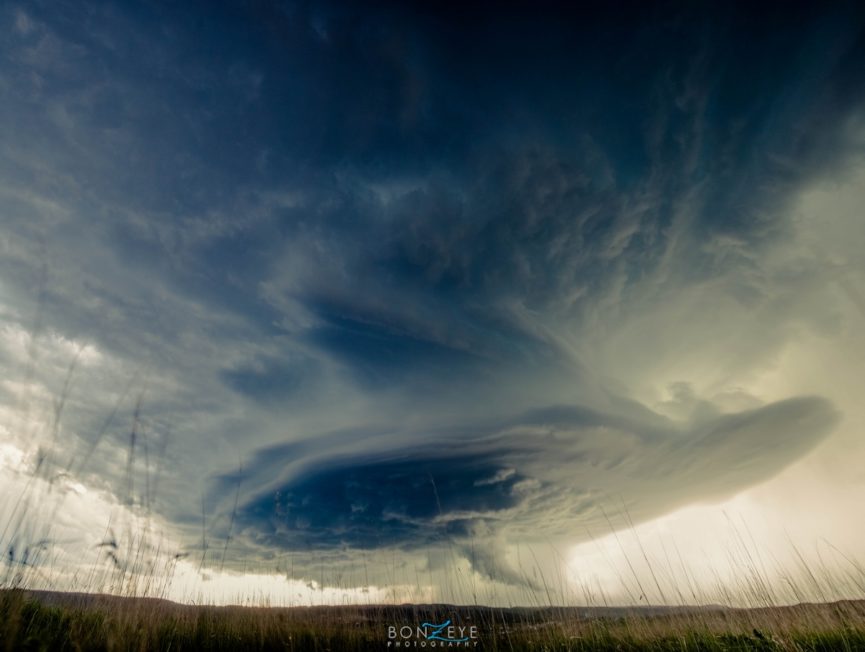 A South Dakota photographer’s video of a swirling storm over Black Hawk on Monday is making the rounds online.

Bonny Fleming and her boyfriend saw the sky getting dark and knew the coming storm would be picture worthy.

“We had just got done mowing the yard and saw this storm brewing so we ran over there,” Fleming said.

The couple, using smartphone apps to track the storm, drove from Rapid City to Black Hawk to get into position to capture shots of the storm that was starting to drop 4-inch hail and heavy rain. Fleming said after getting to the location 10 storm chasers arrived.

“There were all these guys with fancy gear and I tied my cellphone to my tripod with a hair tie,” she said.

Fleming started the time-lapse function on her iPhone, capturing the storm’s movements as it sat and spun for about half an hour.

“There was a lot of speculation that it was going to put a tornado down,” she said. “It was right over Black Hawk which was quite terrifying for everyone who lives down there.”

What is that exactly?

Brad Temeyer, a meteorologist for the National Weather Service in Sioux Falls, said the storm seen in the video is a mesocyclone, also known as a supercell thunderstorm. During the video Temeyer said a cloud can be seen forming on the right of the storm indicating it was reingesting the rain that was falling.

The thin cloud that formed on the bottom of the storm was a wall cloud.

“That would be a precursor to a storm that produces a tornado,” he said. “It was pretty close. You could see it was rotating in the time-lapse pretty well.”

After posting the video and photos of the storm on Facebook and Instagram, the storm became a viral sensation, with the video netting 120,000 views and more than 3,800 shares on Facebook as of Tuesday morning.

Fleming, who is a professional photographer and owns Bonzeye Photography, said she’s been contacted by news outlets all over the country including NBC, CBS, Reuters and the Good Morning America show.

“It’s neat. It’s what you want when you’re putting yourself out there as an artist. It’s amazing how fast it was,” she said.