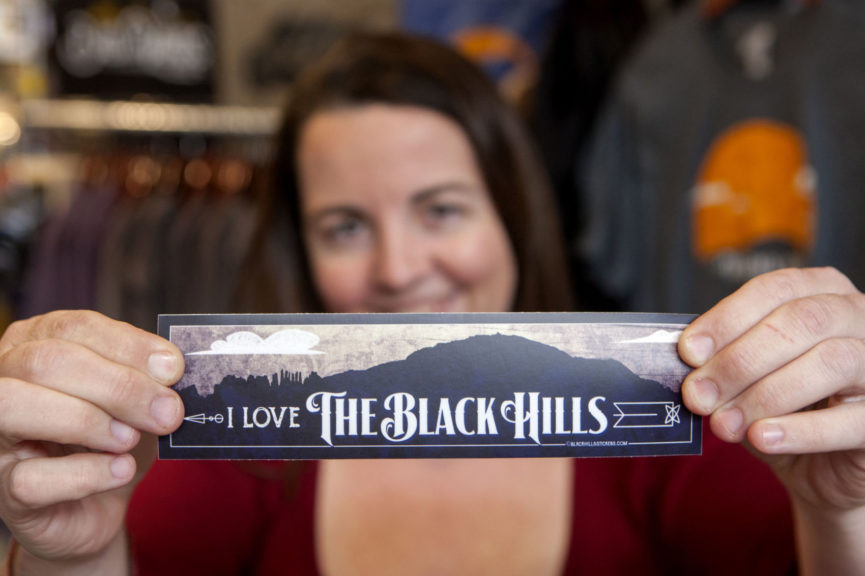 Fleming is a photographer and graphic designer who owns Bonzeye Studio in downtown Rapid City. The natural beauty of western South Dakota inspires much of her work, including a line of stickers. On Dec. 10, one day before the Legion Lake Fire ignited, Fleming’s newest sticker design proclaiming “I Love the Black Hills” debuted in her studio.

As the Legion Lake Fire burned 85 square miles in Custer State Park, Wind Cave National Park and private land, Fleming launched an impromptu fire recovery fundraiser. She posted a video on Facebook on Dec. 14 announcing the sale of “I Love the Black Hills” stickers at $4 each. Fleming’s goal was to raise $1,000. The fundraiser turned out “a little bit better than anticipated,” Fleming said, laughing.

“I didn’t expect to raise the $7,000 at all. I thought I would sell stickers and give the money away. The response was simply overwhelming. We received online orders from every corner of the country. We sold thousands in just two short weeks. I’ve never done anything that took off like this.”

The sticker’s sentiment struck a chord. Fleming had 200 stickers in stock on the first day; within 24 hours she had orders for 432 stickers and she’d already raised more than $1,000. In the midst of the hectic Christmas season, Fleming was filling and shipping hundreds of orders a day, selling stickers in her downtown gallery and ordering more from her supplier.

“Stickers really did go everywhere,” she said. “I had people come into the store and buy them and tell me they were sending stickers overseas. Everybody could pitch in and be a part of something and do something good.”

“The thing that was so cool for me was how many people participated. I just offered this way for people to help, and they were the ones that made it happen. It was so fantastic to be a part of it. … I think that’s the special thing about where we live. People come through and help everybody out.”

Fleming concluded the fundraiser Dec. 31. On Jan. 3, she sent a $7,000 check to the South Dakota Parks and Wildlife Foundation. The foundation will use the funds wherever they are most needed to aid fire recovery, she said.

The “I Love the Black Hills” sticker can still be purchased at blackhillsstickers.com, although no more proceeds will go toward fire recovery, Fleming said.