We were walking out of a local establishment downtown Rapid City, after hearing Lang Termes play another incredible set of music when Aaron said to me “Look Babe! Its KP7 for the next hour!” To which I replied “My camera is at the shop, should we just grab it and go?” Needless to say, we agreed heading out was the right decision and we were rewarded almost instantly Aaron noticed an unusual glow to the west of us. Now, down in our neck of the woods (South Dakota) it’s not completely uncommon to see the lights, but usually they are more-or-less just a greenish glow to the north. What is unusual is spotting them to the west or east, and more so still to see them move. Which is what they were doing. Ribbons of light were cascading from east to west above our heads. It was so exciting, I struggled to keep my composure and nearly forgot everything I had ever learned about using a camera. I was able to pull it together enough to at least capture the oddity. A magnificent sliver of a moon was also just touching the horizon on as it set on the west making for a remarkable sight. 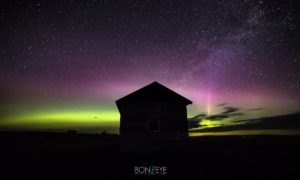 A quick glance at the apps on our phone showed the KP index holding strong at 7 for another hour so we ventured further north. The KP held strong most of the night and as wee wandered all around western South Dakota enjoying each other’s company and the marveling at the sights unfolding before our eyes. All in all we put about 100 miles on Aaron’s Jeep and didn’t pull into the driveway until about 3:30 in the morning (which is way- WAY past my bed time). I have seen the Northern Lights a dozen or so times in my life and what amazes me most is how completely different each event is. Last night though, it just kept changing every time we stopped it was doing something completely new and something I had not seen any of the previous times. It was truly a night I will treasure.